Overlanding West Africa: Who We Are

After a hugely successful 2012-2013 season, including being the first commercial truck based overland company to ever run trips through Guinea Bissau and Sierra Leone, Al Goodridge joined the OWA team as Director.

There is a reason for the lack of trips in West Africa: operating there poses some logistical challenges, due in most part to the under-developed infrastructure, visa procedures, and the political situations in a number of countries in the region. Read our Why West Africa? page for more information.

But rest assured we do have a bit of experience running overland trips in challenging and remote parts of the world. We have over fifteen years experience running overland trips between us – everywhere from West Africa, to the depths of the Amazon jungle, to the remoteness of Mongolia, to the Sahara desert to the national parks of East and Southern Africa – so you’ll be in capable hands. 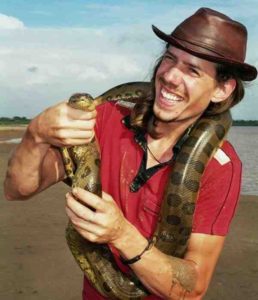 Dave The Hat previously worked as a trip leader, driver and mechanic for Dragoman for over 7 years, running trips throughout South America, Africa, the Middle East and Asia.

“In all those years, nowhere captured my imagination the way West Africa did, it’s by far my favourite region in the world… from the music, to the culture, to the dramatic landscapes, to the larger than life characters, to the chaos of the big cities – West Africa has it all.

I remember watching ‘Sahara’ with Michael Palin in 2002 and becoming totally mesmerised by the region. That was the motivation I needed to go there myself, and I went on a trip from London to Accra as a passenger with Dragoman in 2003. I had such a great time I knew I had to go back there one day.

In 2007-08, I led the Dragoman Overland trip from London to Douala and back with Ben Butler, and then with James Appleby, and though it was a challenge at times I had a wonderful time full of happy memories. 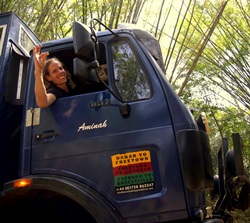 Fast forward to April 2009, and I was driving a Dragoman truck with Jamie Kay from the UK to Helsinki to begin a trip through Russia and Mongolia. Jay asked me if I had thought about buying and building a truck and setting up a company focusing on the region. From that moment on the idea was firmly placed in my mind, and the long thought process began on how to set up Overlanding West Africa”

Through independent travel, working for Dragoman and now Overlanding West Africa, David has spent three years in West Africa and has a true passion for the region. 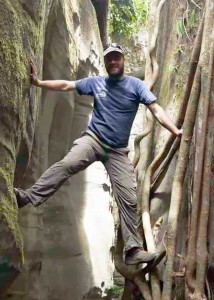 Al Goodridge previously worked for 3 years with Dragoman Overland as a tour leader, driver and mechanic throughout Africa and Asia.

He has had a varied and adventurous career, including working as an outdoor instructor, leading overseas expeditions and working on Australian cattle stations.

He can rarely resist an adventure, from alpine climbing, to cycle touring across South America.

“I keep finding myself drawn back to West Africa, more than all the other places I have worked and travelled. The vibrant colours, the warmth and exuberant friendliness of the people, the energetic nightlife and music, the comic encounters with curious police, the madness and chaos all around; a truly off the beaten track destination that has so much to offer the adventurous traveller”.

I have greatly enjoyed leading previous overland trips in West Africa, challenging trips which have been hugely rewarding.I’m delighted to be joining Overlanding West Africa and delivering trips that really do justice to my favourite part of the world.

Through independent travel, working for Dragoman and OWA, Al has spent 2 years working and travelling in West Africa. 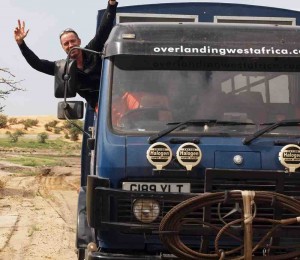 Jimmy C has been involved in the overland industry since 2004, working his way up from Tea Boy to Assistant Operations Manager at Dragoman HQ, before going on the road and leading trips in Africa and South America for three years.

He has also taken off on a few solo trips without the aid of a truck, taking part in the gruelling Marathon Des Sables in The Sahara and Gobi Desert Footrace in the remote Xinjiang region of China but, for the time being at least, is sticking to helping out with the logistics of these events – rather than racing.

He has a nose for adventure and when the opportunity came up to set up Overlanding West Africa with Hatter he knew it was a no-brainer.

Please have a read of our Why Travel With OWA? page to see what makes us different from other overland operators. We have the expert knowledge about the countries in West Africa that other operators are lacking.

To find out what previous passengers who have travelled with Overlanding West Africa thought, please read our Testimonials page.

We’re pleased to announce the bookings are now open for our 2023-24 season of trip, the dates for which can be seen here:  New Dates For...