Our Overland Truck: How We Built Aminah

Built by Dave The Hat and Jimmy Corrigan in 2010-11, Aminah is a bit of a mongrel truck… 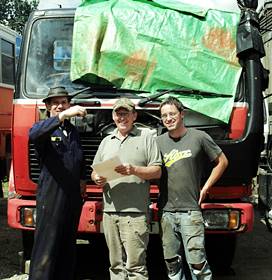 The chassis/cab originally belonged to a company from Norfolk called A.Waterfield & Sons, and we suspect worked as a concrete mixer or tipper truck in her earlier days. As Dragoman Overland’s fleet of trucks rapidly grew in the 1990s, George Durie (Director at Dragoman Overland) bought the chassis/cab with the intention of turning it into an overland vehicle. For various reasons, this transformation never happened, and the truck sat idle for many years and was gradually stripped for spare parts.

Fast forward to July 2010, and Hatter and Jimmy decide to strike! After months of pondering and deliberation the decision was finally made to set up Overlanding West Africa – but we needed a vehicle. After looking at numerous trucks on ebay and exploring every corner of Dragoman HQ for available trucks, we decided we’d found our baby and G sold us the chassis from A.Waterfield & Sons. The wheels were in motion!

However, the truck was completely unsuitable for overlanding, so there was a huge amount of work to do. the truck had a very short wheelbase, no reduction axle, no raised air intake, a very small diesel tank and was in very poor condition electrically (much to Hatter’s dismay!) Luckily, the cab was in very good condition for its age and mechanically she seemed to be in pretty good order.

Before undertaking the chassis overhaul, a decision had to be made about the body. Do we build from scratch? Do we do it ourselves? Do we pay somebody to do it for us? Do we buy an existing body and modify and rebuild it? We chose the latter option. Luckily for us, G was in the process of selling some of his older vehicles and we agreed on buying the legendary PAZ 5014, or ‘PAZ’ for short. 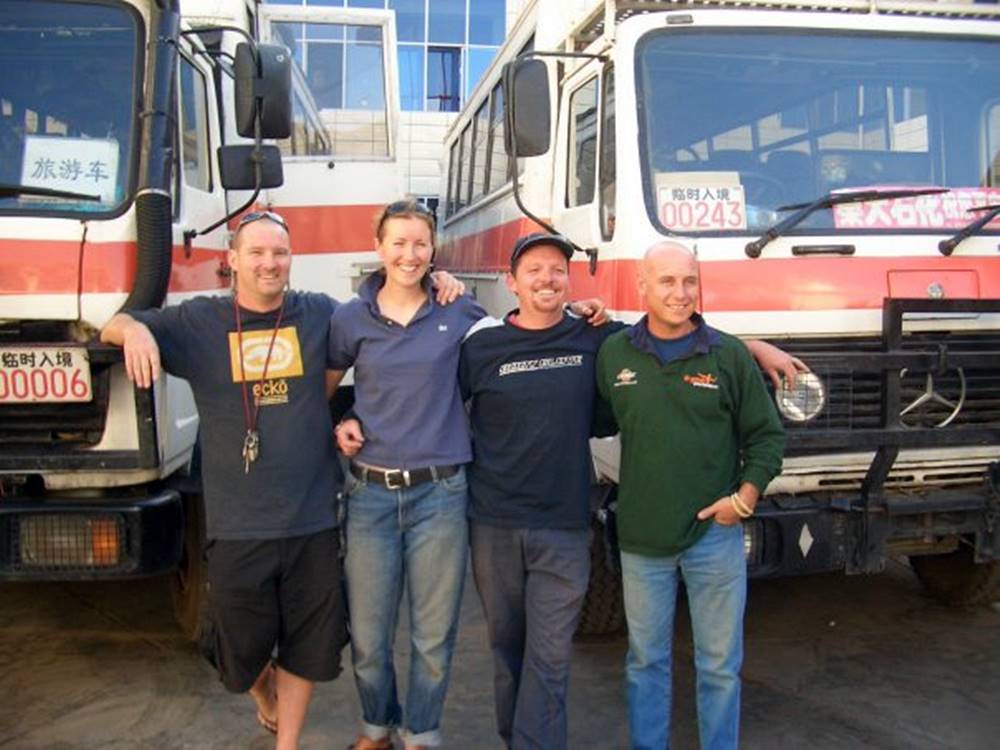 Hatter remembers PAZ well. It was in fact the very first Dragoman truck he ever worked on as a trainee at Camp Green. As he turned up at the workshop for the first time in February 2005 (when Jimmy was working in Operations in the office), Russ Coleman and Kathleen Docherty (Mak) were about to take PAZ out on a Trans-Asia trip (see picture above). Jimmy also worked on PAZ, being one of the last crew to run a trip in her up to Nairobi in 2009. PAZ then sat in the yard at the Twende workshop for the next 18 months feeling sorry for herself and slowly being stripped for spare parts. 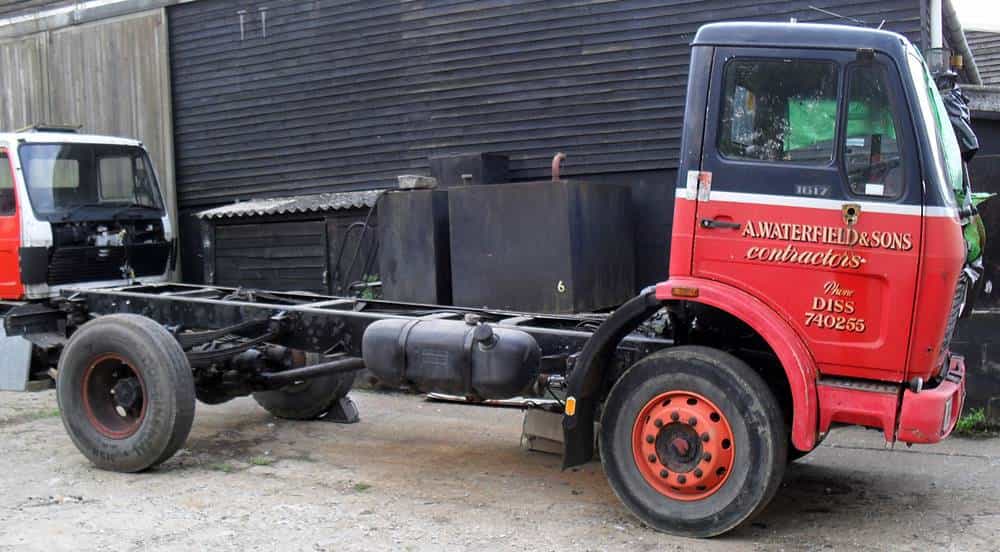 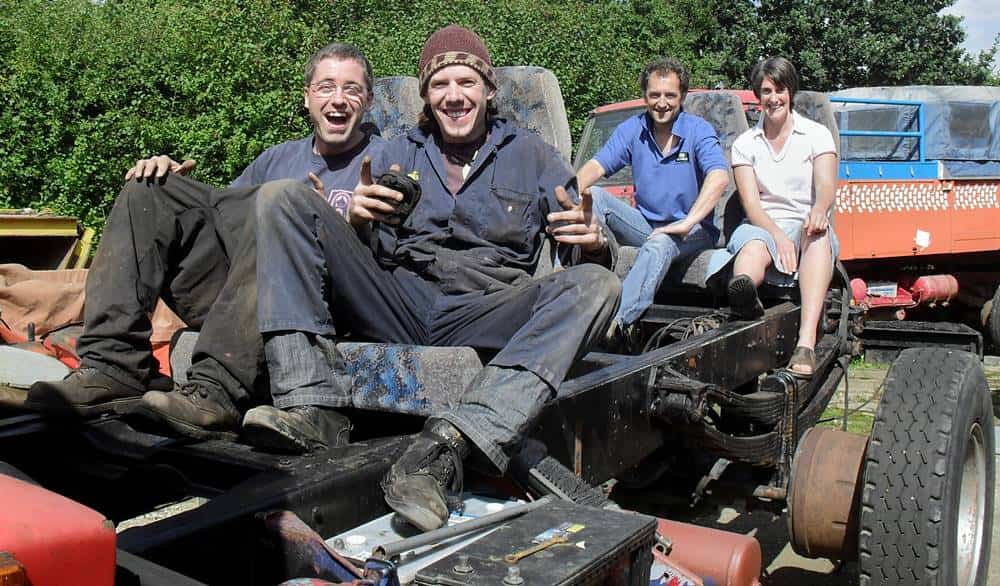 PAZ was originally built in 1984, the second ever Mercedes Benz Drago converted to an overland truck. As we understand it, every overland company up until this point had used Bedford M Types and Leyland trucks. Dragoman boldly decided to build bodies on Mercedes 1617 NG chassis’ instead. As George Durie, Mike Sykes, and Charlie Hopkinson (the three directors at Dragoman) told us, they were worried. These trucks were considerably longer and heavier than Bedfords and Leylands, and much more expensive! There were big question marks as to whether the new trucks would manage to get across the log bridges and deep ruts of Zaire, but PAZ of course managed her maiden voyage with a characteristic lack of worries, and served Dragoman for 25 years notching up millions of kilometres criss-crossing Africa, the Middle East, and Asia. 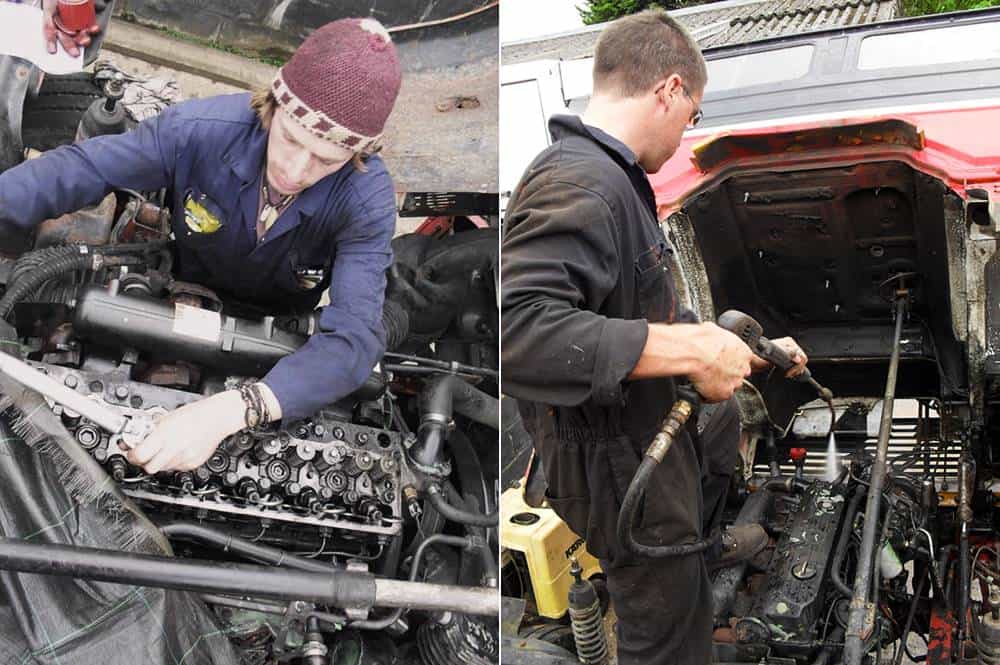 By July 2010 when Hatter and Jimmy decided to buy PAZ’s body, many years on the road had taken their toll. We knew driving the truck back to the UK from Cape Town would be a costly and time consuming affair, so we shipped her from Port Elizabeth to Southampton. As we picked her up from the docks and drove her back to Dragoman HQ, we both realised the huge task that lay ahead. PAZ was in a sorry state (although she did fire first time – she knew she was coming home to Camp Green!). The seats were mouldy, the flooring rotten, and the panels damaged. This was going to be a bigger job than anticipated! 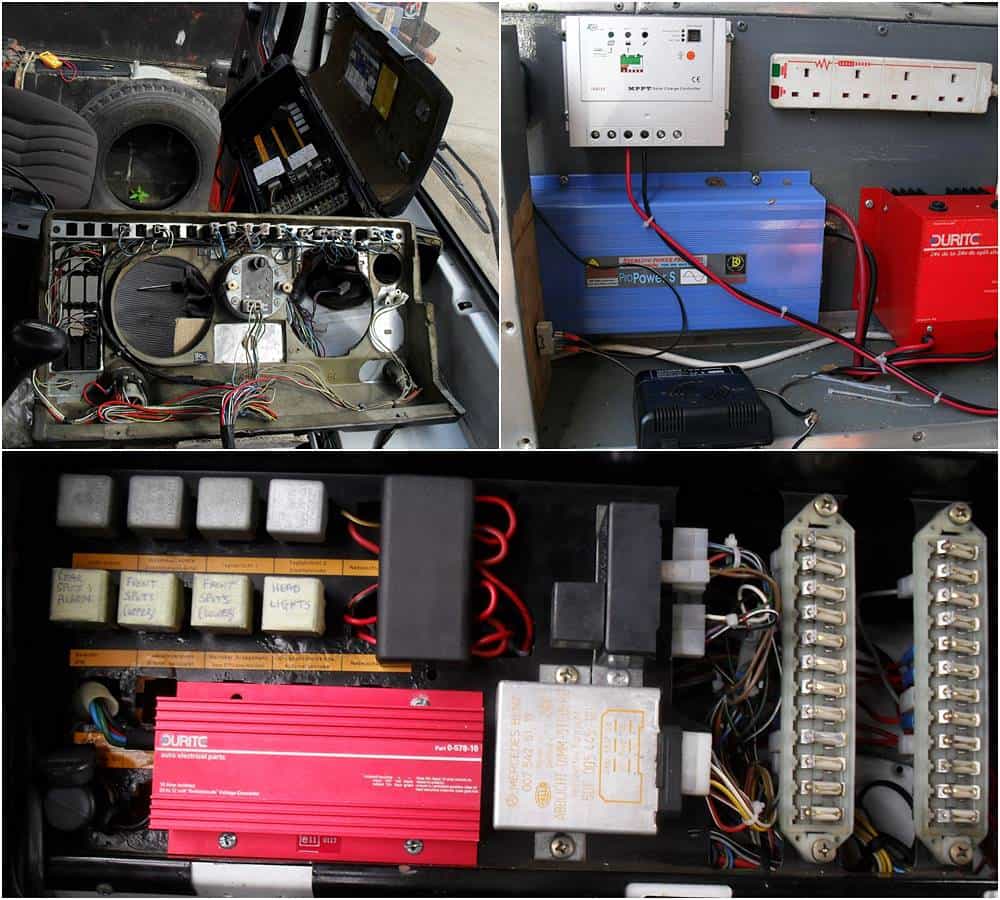 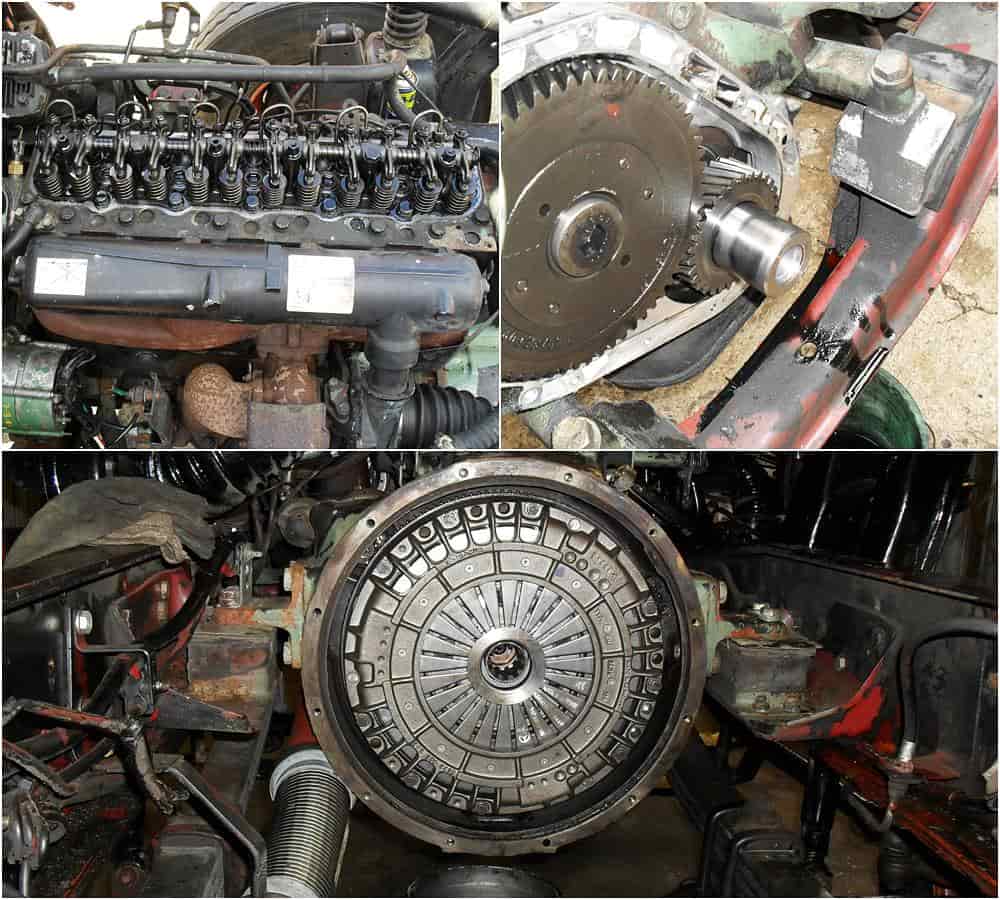 The primary problem was the size of the body. It was too small and pokey with a distinct lack of leg room. So a decision was taken to strip the body completely, right back to the steel frame, and then extend the framework to the front and to the rear, before rebuilding the entire body. For many days and to the great delight of the ladies in the Accounts Office – Hatter and Jimmy made  huge amounts of noise with angle grinders, club hammers, and cold chisels, as we removed the wooden flooring, aluminium panels, and all the rusty framework. 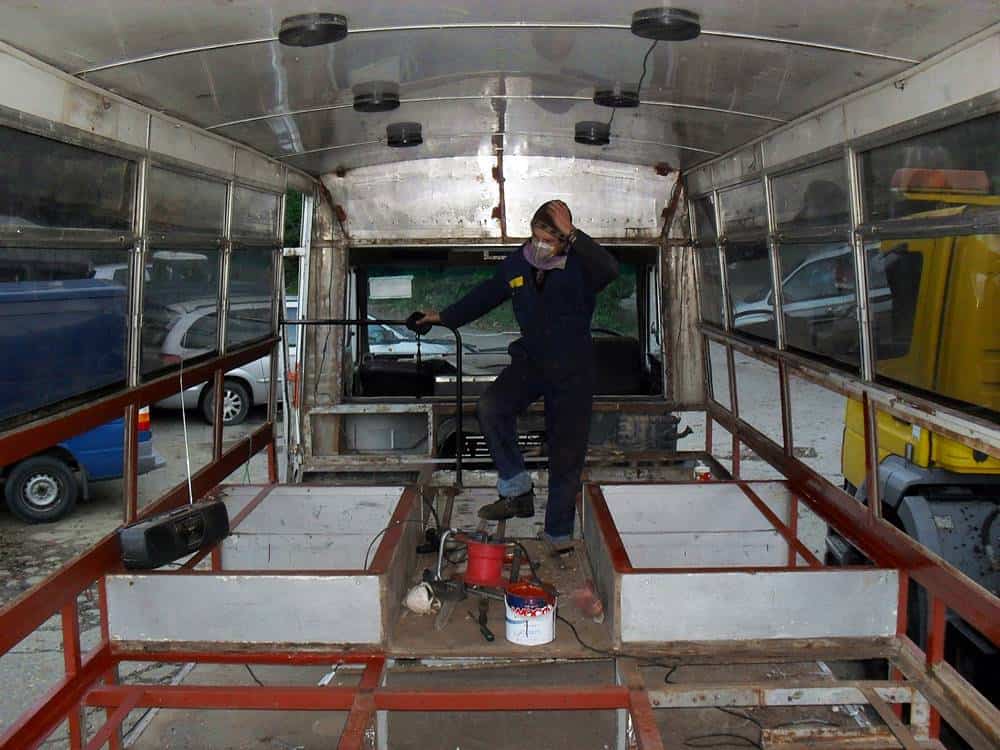 By this stage, we had given the chassis/cab a major mechanical overhaul. Both the axles had been swapped, new parabolic springs fitted, a new clutch/pressure plate, a complete electrical rewire, new radiator, alternator, complete air tank transplant, new head gasket, new injectors, new tyres, and new slack adjusters amongst other things. With the decision made to extend the framework of PAZs’ body, we needed to lengthen the chassis to accommodate the longer body. We extended the chassis in the mid-section and also at the rear. We then of course had to get the prop shaft lengthened accordingly. By this stage, it was Christmas 2010 and Hatter and Jimmy downed tools for the festive break. 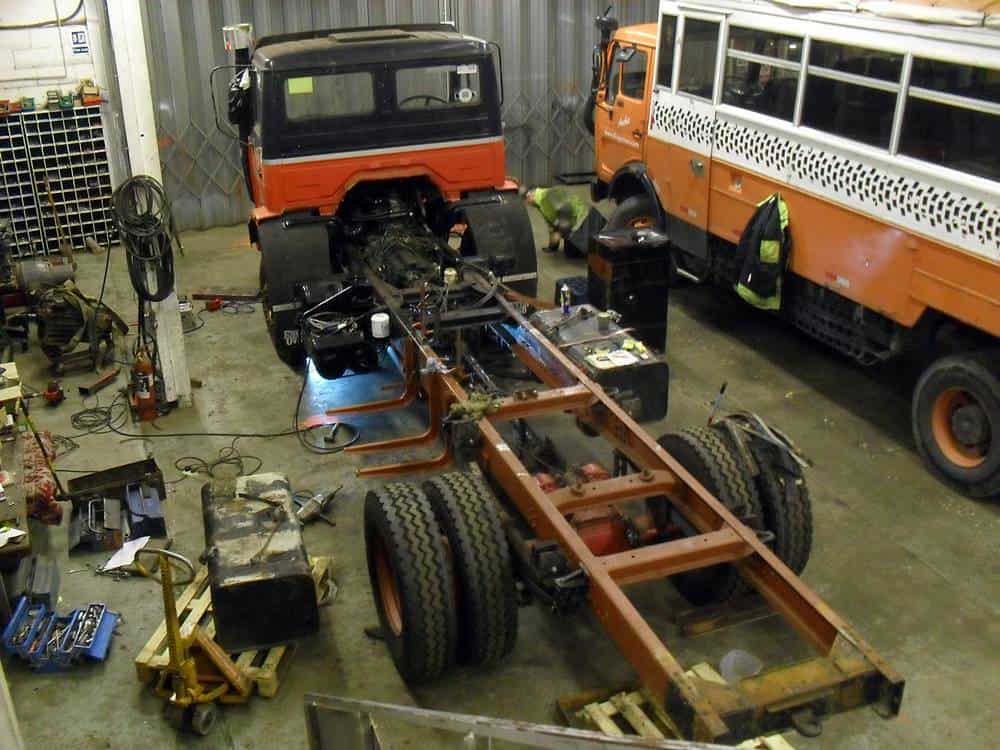 Returning in January 2011 to some bitterly cold weather, we transplanted PAZ onto our chassis. By now she was naked, just steel framework, and had been de-rusted and red oxided throughout (magic ointment).

For the next few weeks we cut both the rear and front of the truck out, and all the rusty steel in the middle, then proceeded to chop, grind and weld countless new sections of steel to create the new frame. For this we owe a huge debt of gratitude to George Durie and Dan Luscombe at Dragoman, and Paul ‘Ginge’ Bowler of Bowmart, for doing all the structural welding for us (many hours of work, thanks again guys). 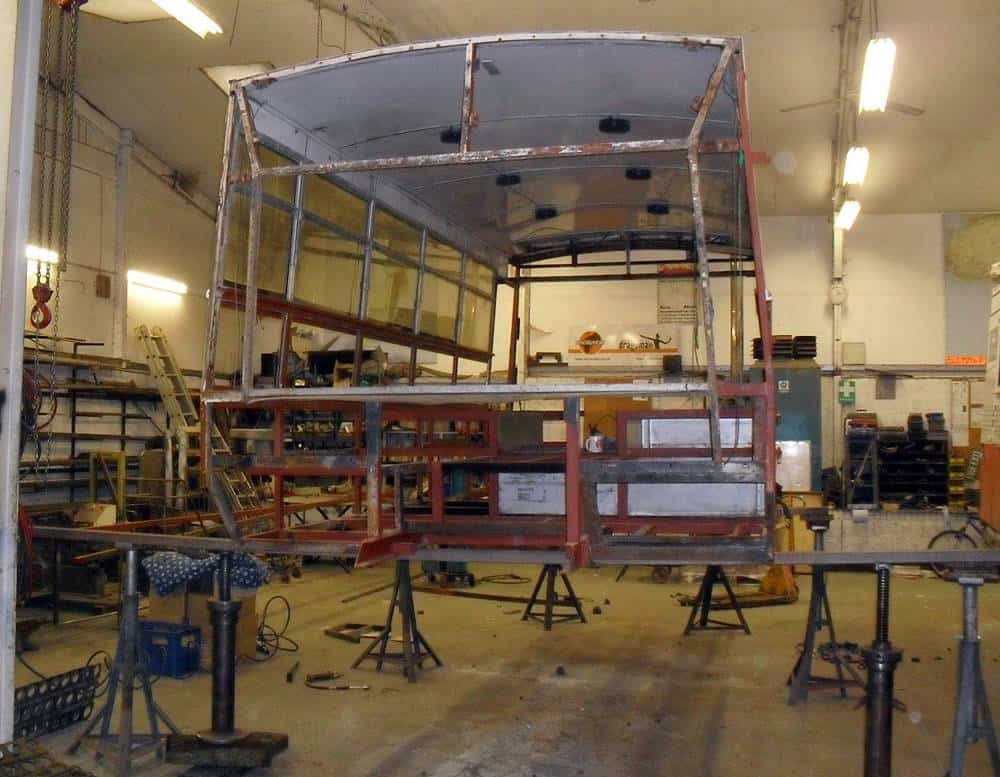 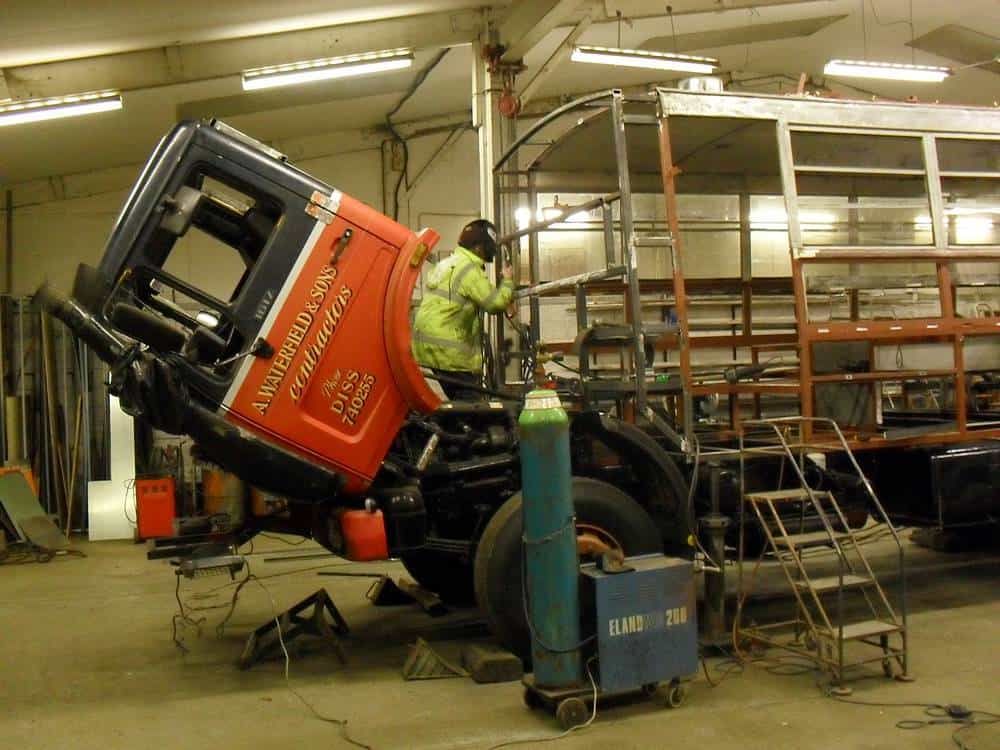 After grinding the welds smooth and then painting the frame with red oxide and a top coat of black, our mongrel truck was born! We took her on a successful test drive, and then began fabricating: new ply wood for the lockering and seating level, which involved endless hours of painting sheets of ply, watching them dry and then painting them again…and again..and one more time just to be sure! We then cut huge amounts of sheet aluminium and stuck it onto the steel frame, trimmed the joins then drilled and riveted it all in place.

Next we moved into the interior, laying insertion rubber sheeting onto the wooden floor, sticking chequered plate style vinyl to the interior panels, trimming all the joints, putting new windows into the extended frame, and painting the roof. Aminah was really taking shape by this stage. With the cab to body seal added the truck was watertight – hooray, no more mopping up the leaks when the rain came! 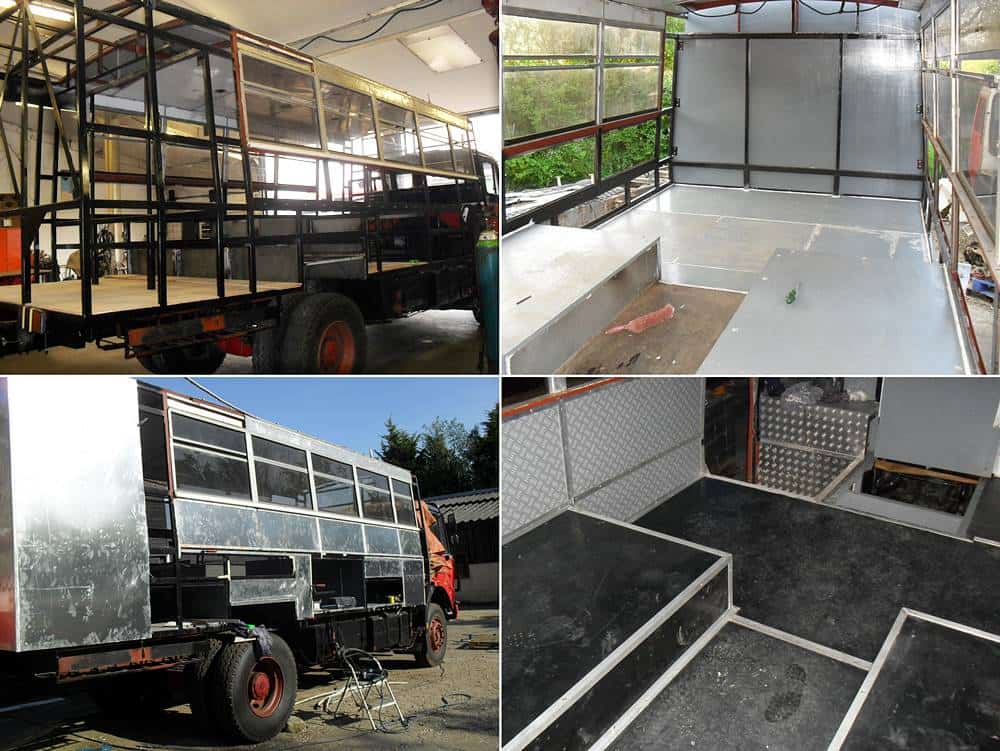 We then proceeded to weld new legs for the seat frames, before bolting them all in position. Once complete, lots of wiring was run for the internal lights, speakers, and fridge, along with a set of leisure batteries, split charger, inverter, and charge points.

The final stage was sanding the truck down, taping her up, and spraying her. Once complete, a bit more fiddling around was done before taking Aminah off for a VOSA inspection and MOT. Many thanks to George Durie at Dragoman Overland for putting the paint on Aminah for us! 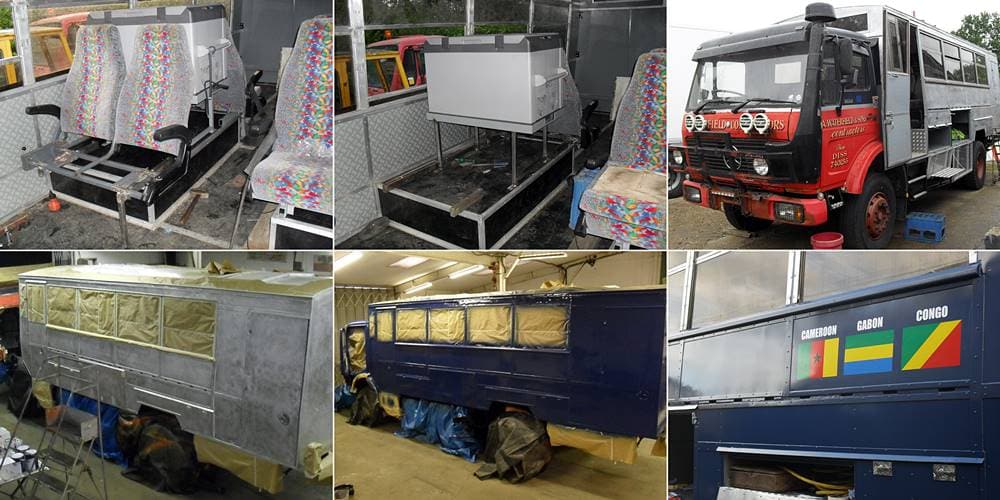 By September 2011 we finally had ourselves a beautiful AND completely roadworthy overland truck, ready to take on the challenging and rugged terrain of West Africa. Hopefully Aminah will run for many years to come! 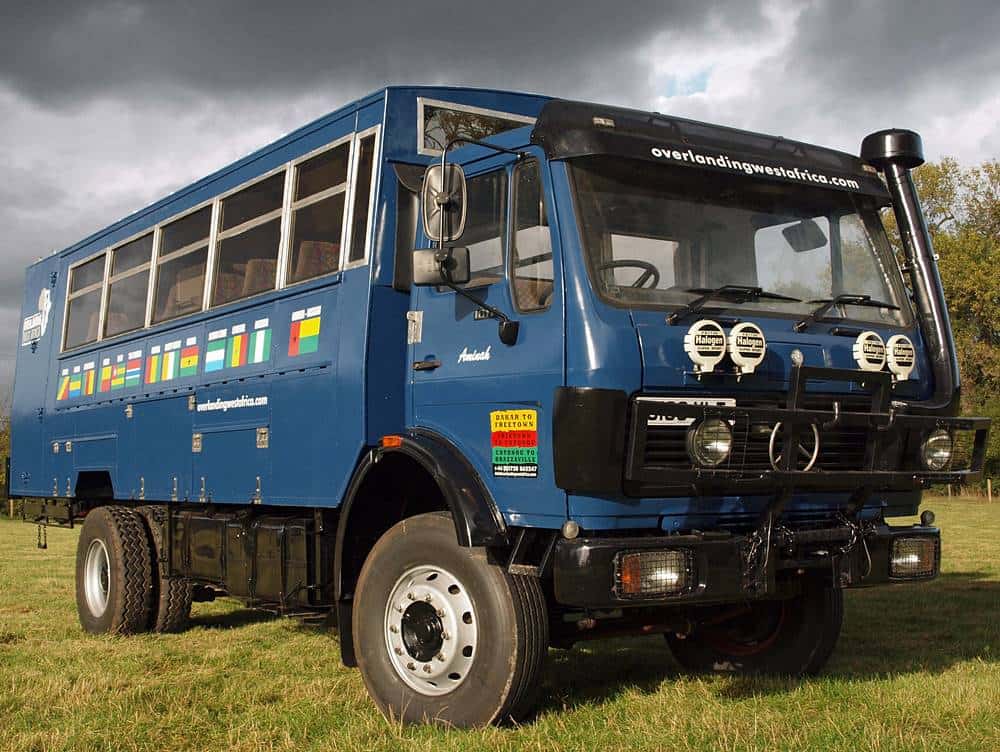 Here is a brief video of Aminah on her maiden voayge through West Africa. This video was taken by passenger Will Betts as Aminah ploughed through the mud in Guinea’s Fouta Djalon region in 2012. Good girl Aminah!

Here is a photo video showing how Dave The Hat and Jimmy Corrigan built Aminah from the chassis up between 2010-11 – enjoy!

Hi everybody, After leaving the UK in September 2016 for another expedition down to West Africa and back, Aminah is home! Our last trip of the...